Israeli Elections: Occupation is the Only Winner 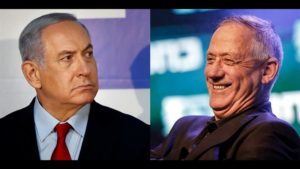 Israeli Elections: Occupation is the Only Winner

The Israeli September 17, 2019 elections, which were held to resolve and overcome Israel’s political crisis created by the April 2019 elections, have only deepened it. Now, the possibility of holding new elections to get out of the current crisis does not seem too much as a fantasy. To overcome the current crisis, Israeli President Reuven Rivlin, called on Benjamin Netanyahu, current Israeli prime minister and Likud leader, and Benny Gantz, head of Blue and White coalition, to overcome their differences and try to form a unity government while alternating the prime minister position between the two, but this government faces a serious problem. Netanyahu insists that he should be the first in power to benefit from his immunity as prime minister and thus avoid being trialed. Meanwhile Gantz, who formed the Blue and White Party to oust Netanyahu, insists that he should be the first in power while hoping that Netanyahu, without immunity, will be trialed during this period and gotten rid of.

But what do Israeli elections and their results mean to the Palestinians? Although the Israeli elections determine much of their political fate, the five million Palestinians under occupation in the West Bank and Gaza Strip have shown little interest in elections. After all, they see that the ultimate winners at the end of the day are: The ongoing occupation, settlement policies, and land confiscation.

The real dilemma – normalization of annexation and settlement

The elections of April and September 2019, as well as the 2015, 2013 and 2009 elections were focused on internal Israeli issues and partisan conflicts related to many issues, the last of which was ending occupation. Gradually, this has led to transforming the issue of occupation into a mere security issue that is only addressed when operations take place against a national background. Concurrently with this attitude, there were massive Israeli infrastructure projects to expand settlements in the lands under direct occupation, classified as Area (C), which constitute 62% of the Palestinian land, to change facts on the ground and make settlements a reality.

These elections have dramatically demonstrated how political statements have changed from problematic ones into part of a consensus. This includes the attitude towards settlements and settlers, which had been the subject of debate on the eve of Rabin’s assassination. Statements related to the imposition of sovereignty on the West Bank have changed from mere expressions uttered by marginal extremist settler groups into a governmental action programme of Netanyahu and the Likud. On top of that, this programme is further characterized by populism, mobilization and incitement against Arabs in Israel and the Joint List (which is considered their main representative), and clearly against Palestinians at large.

In reality, existing parties (with the exception of Meretz and Arab parties) became divided between two main streams: a right wing stream led by Netanyahu with a clear colonial and ideological political agenda that offers annexation of even the smallest settlements and seeks to end any Palestinian dream of emancipation, and a centrist opposition stream with a personal agenda to overthrow Netanyahu due to lawsuits of bribery and corruption he is accused of. The latter focuses on deterrence and force, taking advantage of the military background of its members. To a large extent, it intersects with in central issues related to the annexation of settlement blocs and the Jordan Valley, the preservation of a united Jerusalem as the capital of Israel, and in considering occupied Syrian Golan as part of Israel forever, but it calls for the evacuation of isolated and small settlements that constitute a security burden.

This intersection did not happen by coincidence. It was part of a persistent policy of Netanyahu and his supporters to move public awareness to the right by delegitimizing the persistent discourse of associations and parties calling for an end to occupation.  With the rise of Trump, Netanyahu found a golden opportunity to turn any talk of ending occupation, withdrawing from the occupied territories and dismantling settlements into an irrelevant one. On the other hand, he pursued a fierce policy of consolidating settlements accompanied by a gradual escalation of discourse about annexing settlement blocs and imposing sovereignty on them, until the Likud Central Committee – voted by the end of 2017 by a large majority – on imposing Israeli sovereignty on the West Bank. On the 1st of September 2019, Netanyahu announced that he will work on imposing “Jewish sovereignty” on settlements, stating that there will be no dismantling of any settlement. Several days before the elections and in a dramatic announcement, Netanyahu announced that if he wins the elections and succeeds in forming a right-wing government, he will annex the Jordan Valley and the northern Dead Sea area directly to the Israeli sovereignty, and will then work to annex the rest of the settlements in coordination with the US administration. He noted that he will not allow the evacuation of any Jewish settler nor any settlement in the Palestinian territories.

In contrast to Netanyahu’s annexation programme, the Gantz-led opposition adopts a loose and elusive political programme that deals with Palestinians primarily as a security issue that must be addressed by “restoring deterrence in the south through pursuing an independent security policy against the Gaza Strip, which includes a zero-tolerance policy toward provocation and violence against us,” as stated in his programme. As for the political aspect associated with ending occupation, Gantz’s party, Kahol Lavan, has much in common with the Likud. It states that it will work to sustain settlement blocs and maintain a united Jerusalem and occupied Golan under the Israeli sovereignty, but contrary to Netanyahu who does not accept the evacuation of any settler, the party also says that it will evacuate isolated settlements. Apart from that, the coalition has tried to even be more rightist than Netanyahu when Moshe Yaalon and Kahol Lavan tried to raise doubt about Netanyahu and announced that it is part of the coalition’s programme to make the Jordan Valley part of Israel in any agreement, adding that Netanyahu was ready to abandon it in previous talks.

The fact is, regardless of the Israeli government to be formed, be it a secular national unity government that includes Kahol Lavan, the Likud, Lieberman’s Yisrael Beiteinu, a narrow right-wing government that Lieberman will rejoin, or a narrow secular government led by Kahol Lavan with Lieberman and some Likud members, it is clear that occupation, settlements and settlers are the biggest winners.

Meanwhile, the Palestinians stand in front of two streams. The first is a right-wing settler stream that considers Palestinians as an obstacle that must be overcome. They are a security obstacle if they resist, and a demographic obstacle for merely being present and living on lands that are aspired to turn into settlements. This is especially the case in (C) areas, and just as important is the Jordan Valley, which Netanyahu promised to annex along with the northern Dead Sea if he succeeds in forming a government. The second stream is an opposition stream which has great points in common with Netanyahu in relation to annexation. This stream promises to strike with an iron fist to restore deterrence in Gaza, but it also promises to restore the prestige of Israel’s state institutions and to fight corruption.

In this dark, surreal reality, Palestinians have to choose who will be best to end their dream of emancipation: a populist and hatred inciting prime minister who is accused of corruption and bribery, or a military prime minister vowing to wage a war on Gaza that would bring it back to the Stone Age!

Dr. Hunaida Ghanem is the general director of the Palestinian Forum of Israeli Studies – known as MADAR. She holds a Ph.D. in Sociology from the Hebrew University of Jerusalem (2004). She is specialized in political sociology and she has a number of published books and studies on Israeli policies, military occupation and colonial settlement in Palestine.