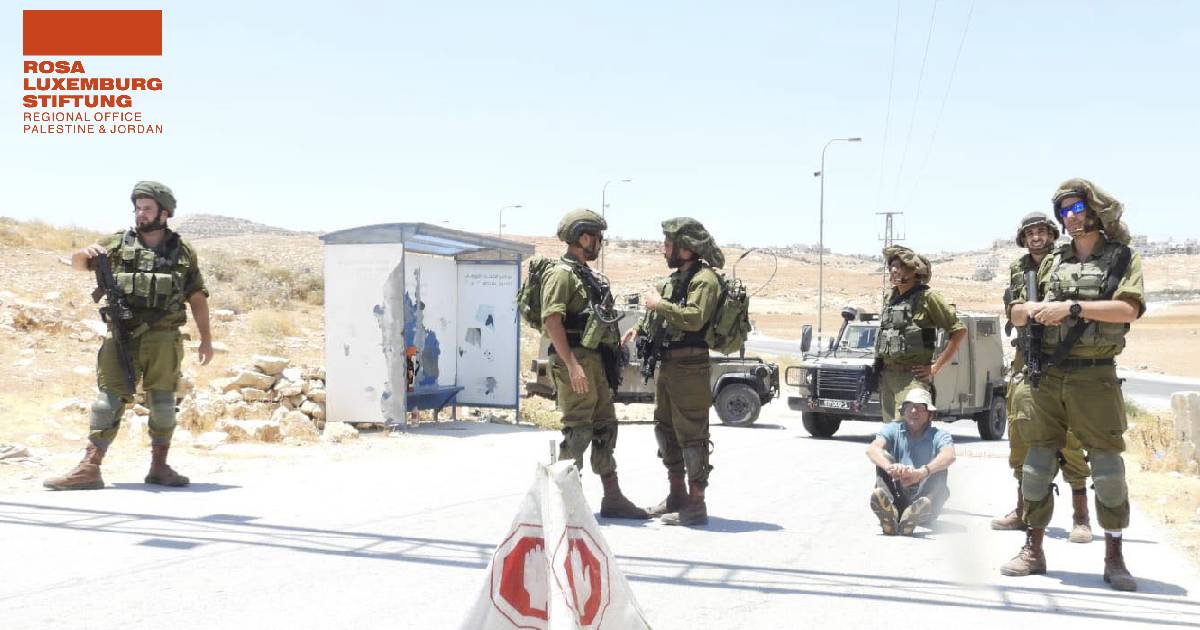 Masafer Yatta, an area in the southern West Bank, is home to 2800 Palestinians spread out over different small villages, 12 of which are firing zones.[1] It fell under occupation in 1967 when Israel occupied the West Bank, Gaza, and East Jerusalem. In the 1980s, Israel had declared Masafer Yatta as a “Firing Zone 918” used for military training, which meant no civil presence would be allowed[2]. In 1993, following the Oslo Accords between Israel and Palestinian Liberation Movement (PLO), Masafer Yatta was designated as Area C. This meant it became under full Israeli military and administrative control, but only for an interim period. After 1999, [3] this area – as the rest of the Palestinian lands in Area C – was committed to be transferred to Palestinian jurisdiction and have full Palestinian sovereignty and control. However, the Occupation’s domination persisted, and Israeli settlements continued to take over the area, reaching eight illegal entities. Until this day, Israel remained the occupying power, putting Masafer Yatta’s inhabitants at serious risk of forcible eviction.[4]

Sari Harb, programme manager at the RLS Regional Office for Palestine and Jordan in Ramallah, spoke with Ali Awad, a youth activist and resident of Masafer Yatta, who along with the other residents are aiming to stop the forcible eviction Israel is threatening Masafer Yatta. This interview also points out how Israel has been profiting from the international aid allocated to the area. 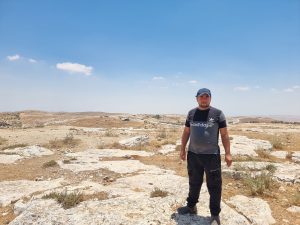 Let’s start with the basic question: What is happening in Masafer Yatta? What is the current situation?

In May of this year, Israel’s High Court gave the [Israeli] military the green light to expel over 1,000 Palestinians from this area, including my own community of Tuba. Israel already deported us once from here, in 1999, when I was only one year old; that time, they loaded us onto military trucks and drove us away, before the Israeli court issued an interim injunction allowing us to return following an appeal. This time, it seems that the displacement from what Israel calls “Firing Zone 918” may look quite different — and even scarier.

In the weeks since May’s court decision, people’s lives here have become much harder. The army is hoping that by persecuting us enough they will make it impossible for us to remain, thus forcing us to leave “voluntarily.” By holding live-fire training drills next to our villages this month, for example, they are saying to us: “Your home has become our military playground. We will do whatever we want, never mind that you live here.” The census is just the latest indication of how the army plans to force us out of our homes.

Masafer Yatta used to be an active and vibrant region. Palestinians from across the country would regularly visit to enjoy the beautiful nature in springtime. But since the court hearing, and with the Israeli army intensifying its efforts to restrict the movement of Palestinians here, people are too afraid to come. In the eyes of the soldiers, everyone is now subject to arrest for being in the “firing zone,” including the residents of the villages located inside it.

Why do you think Masafer Yatta is appealing to the state of Israel?

As a settler-colonial state, Israel wants the land, but not the people. What is happening in Masafer Yatta is the continuous Nakba that has been happening since 1948. It is part of their annexation plan of Area C and that means that they need to expel the people.

As colonial capitalist regimes, the Israelis want all the land to capitalize their businesses. They claim that Masafer Yatta is non-productive land, and that they want to transform it to agricultural land – although Masafer Yatta has been historically a vibrant land and source of living for Palestinians. How we see it nowadays, the Occupation is the main obstacle for making the land nonproductive. Israel is annexing the land, cutting the water and electricity, removing Palestinians, and building Israeli settlements. Such measures will make any land, even in Germany, nonproductive.

What will happen to the residents if Israel forcibly removes them from Masafer Yatta? And how are the Palestinians coping with this?

We will keep self-defending our land. Masafer Yatta is our home; it has been vibrant since generations, and we are determined to resist and remain steadfast in our land. Regardless of how many times they demolish the schools and homes, we will keep building until we are free. We will not allow the Nakba to continue. 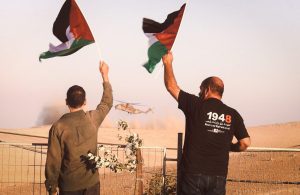 The Israeli colonial project always aims to expel Palestinians from their lands. Declaring lands as a firing zone is one of their tactics. When declared a firing zone for military training, no civilian presence is allowed.

In 1980, Israel declared 3000 hectares a firing zone. Since then, our daily life has become a hell, as Israeli forces blocked us from building and getting water and electricity so as to force us to leave. This is a war crime, but Israel has impunity.

How do you evaluate the Israeli justice system in the case of Masafer Yatta?

We don’t trust the Israeli justice system as it’s part of the Israeli colonial system. We go to the Israeli court knowing beforehand that it will not rule for our benefit. However, we hope that by going to the Israeli court we can slow down the demolitions and confiscations. We hope that with time some elements can develop such that more Palestinians join our efforts in self-defending the land. More pressure from the outside can also put pressure on Israel to stop its forcible eviction plans on Masafer Yatta and all occupied land.

The Israeli Court’s decision regarding Masafer Yatta, which has already being carried out with the expulsion of the Najjar family on May 11, is an important step towards the annexation of Area C. If Israel can evict the residents of twelve villages, with a population of over 1,000 Palestinians, unhindered, more such expulsions are anticipated, not only in the south of Hebron, but throughout the occupied Palestinian territories.

The Palestinian villagers of Masafer Yatta and their legal representation know very well that no real “justice” can be obtained from the Israeli court system. They continue to fight the legal war, anyway, in the hope that a combination of factors, including solidarity in Palestine and pressure from the outside, can ultimately succeed in compelling Israel to delay its planned destruction and Judaisation of the whole region. 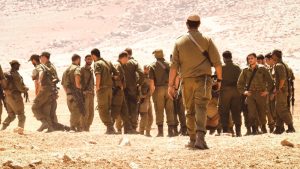 Is there any support from international bodies?

There is, yes, but it’s limited, and most of the time it does not challenge the root of the problem, which is the Occupation. Take, for example, our right to electricity in Masafer Yatta: Israel is an occupying power that should provide us with electricity, but it does not, while illegal settlements are fully lightened.

This is the reason that the organization, Comet-ME [which provides basic energy and clean-water services] was founded: It’s because European governments are more inclined to emergency humanitarian support as a response to the Occupation’s violations of our basic rights. Yes, this offers us a temporary solution for electricity now, but it is still under the threat of being demolished by the Occupation forces. In this respect, such endeavors may focus on providing temporary solutions rather than sanctioning Israeli destruction of our villages, so that we can build all the basic infrastructure needed.

International support should not be a bandaid. On the contrary, it must work on ending the Occupation. You see international positions towards what’s happening in Ukraine against the Russian military. Meanwhile, Palestinians have been going through much worse, but Israel is not held accountable. This is a double standard.”

How do you see coverage of what is happening by international media?

We wish the mainstream media not to be hypocritical. You see how mainstream media is covering the Russian invasion of Ukraine, and how they are supporting the right of the Ukrainian people to self-defend their lands, while when it comes to the case of Palestine, suddenly the Palestinians are demonized, although they are defending their lands of invasion and occupation.

What we want from international media is to be professional, and report on events the way they are. For example, it is not ‘a conflict,’ rather, it is a military occupation–a settler colonization of Palestine.

Today, we are creating our own platforms, with our narrative and discourse, and that is helping a bit, in making our voices heard.

[3] The Guardian. “Life in the Firing Zone: The Occupation of Masafer Yatta. June 9, 2022.  https://www.theguardian.com/news/audio/2022/jun/09/life-in-the-firing-zone-the-occupation-of-masafer-yatta-podcast 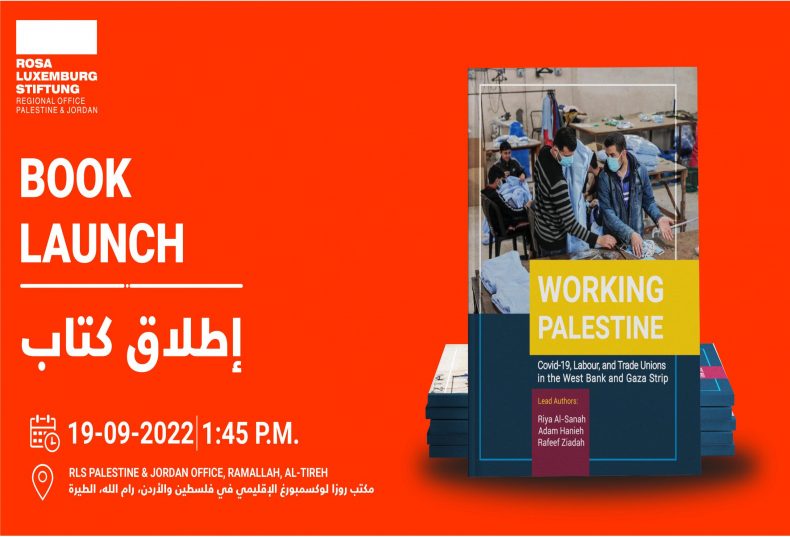