Gaza’s Fishermen … With No Protective Shield 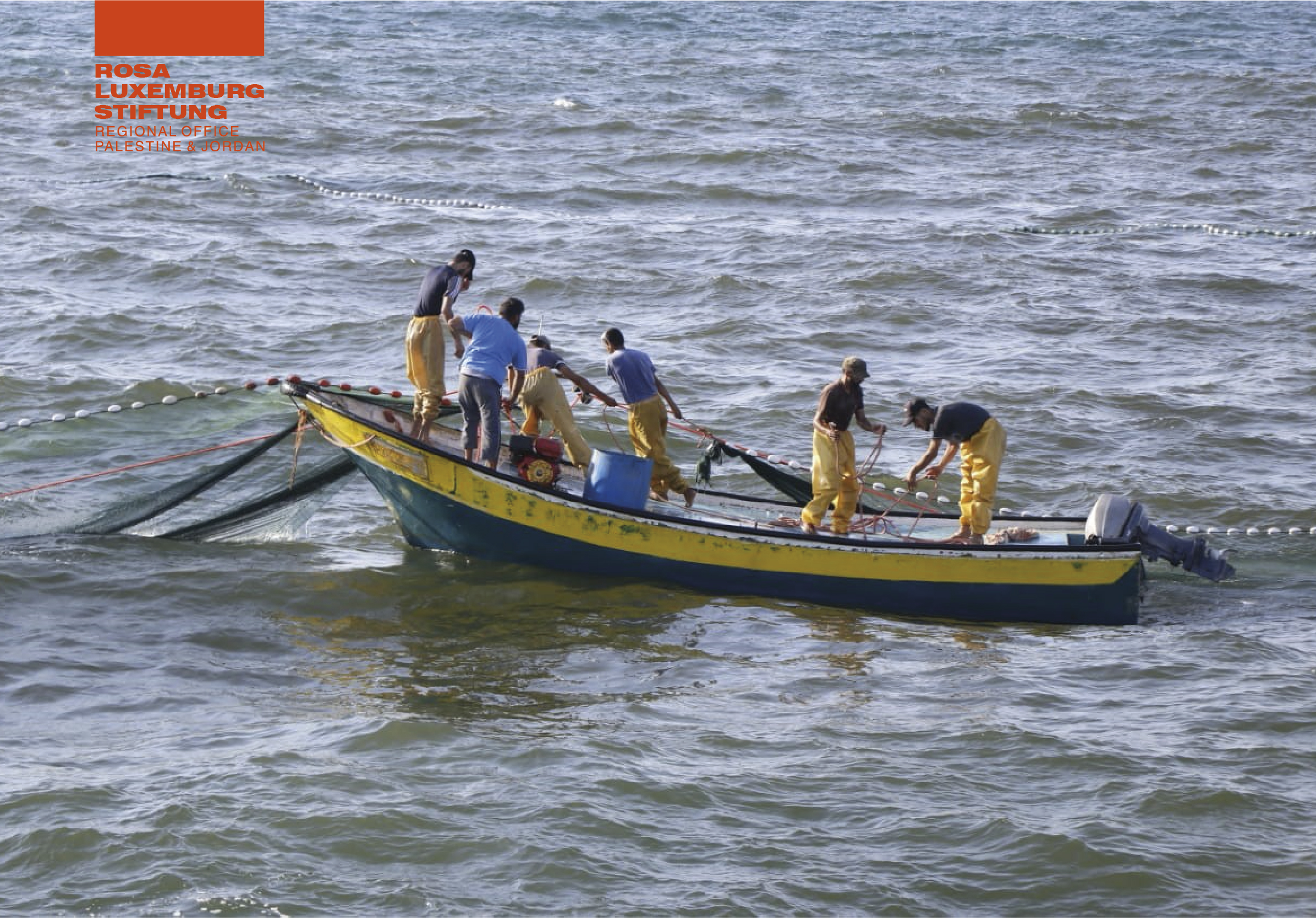 To read via PDF: Gazas Fishermen … With No Protective Shield

Gaza Strip’s fishermen are among the most vulnerable and economically fragile segments of society. This is because their income and livelihood completely depend on their fishing work. In light of that, and since 2000, the Israeli occupation has largely curtailed Gaza’s fishing areas and maritime access. This usually takes place during the main fishing seasons, and especially in the context of the two sardine fishing seasons that are crucial for Gaza’s fishermen. The Israeli occupation also prevents Gaza’s fishermen from accessing the minimum of 20 nautical miles agreed to under the Oslo Accords, as well as prohibiting the entry of fishing tools and maintenance equipment and the manufacturing of boats (which are classified as “dual use” materials) and boat engines. This greatly disrupted the work of fishermen and significantly reduced the quantities of fish in the Gaza Strip, thus affecting the economic condition of most fishermen. Consequently, the average monthly income of Gaza’s fishermen is now approximately 100 USD[1] (in the past, it was more than 400 USD/month). Estimates also indicate that more than 90% of these fishermen’s households live below the poverty line. In the past 14 years, these fishermen have suffered from countless violations by the Israeli occupation, including the harmful blockade on Gaza, ongoing maritime closure, almost daily harassments (which usually lead to physical and/or material losses), and negative psychological effects of insult and humiliation.

Statistical data revealed that, since the imposition of the blockade on Gaza in 2006 until the end of November 2020, a total of 10 fishermen were killed, 183 were injured, and 650 [fishermen] were arrested as a direct consequence of Israeli attacks. Moreover, 198 fishing boats were destroyed and 167 of them were confiscated.[2] Gaza’s fishermen also underwent substantial losses during the three Israeli wars on Gaza. For example, in the last Israeli war on Gaza (i.e., in 2014), the occupation bombarded many fishermen’s rooms (including their properties and tools) and destroyed numerous fishing boats.

Statistical data shows that Gaza Strip has about 4,000 fishermen and approximately 1,750 fishing boats[3] of various sizes. These fisherman struggle on a daily basis and experience severe hardships to provide a livelihood for their families, whereas the Israeli forces only allow them to work in narrow maritime spaces. These areas are usually between 3 to 6 nautical miles from the coast, and they are the same areas in which the attacks on fishermen are carried out, thus leading to death, injury, arrests, and the destruction of fishing boats and tools. These assaults left far-reaching effects on fisherman in a way that surpasses economic aspects. For example, fishermen were affected socially, mentally and health-wise in the absence of a supportive regulatory body that defends them, alleviates their burdens, gives them hope for a better future, and encourages them to struggle to change their conditions. This supportive body (which can be similar to an incubator) can exert pressure on decision and policy makers to develop and implement plans and programs to improve fishermen’s conditions and create a more suitable and humane environment for them.

Gaza’s fishermen generally rely on association action to counter the perpetrated injustices against them (regardless of their source). Therefore, associations are a main supporter for improving their conditions so that they would live a decent life and enjoy their most basic rights.

However, the Gaza Strip only has one association for fishermen, namely the “Gaza Fishermen’s Association” (also called “Gaza Fishermen’s Union”). This Association was established in 1998 and held four Board of Directors elections since its inception 22 years ago. It is worth noting that the Association never issued or presented any financial or administrative report to the General Assembly except for one case, during which the report was recited without distribution. The Association had three chairmen so far, and its current Chairman has been in office for more than 18 years.[4] It never struggled for the rights and demands of fishermen to improve their condition, as well as failing to protect and develop the fishing sector. Many fishermen who were involved in the Association since its creation noted that it has always been subservient to the government – both before and after the Palestinian division – and it never objected to governmental policies and decisions and did not demand the enactment of relevant laws. Moreover, it failed to propose the introduction of new policies related to fishermen and the fishing sector. This shows that the Association is weak and has not performed the main role for which it was created, as well as failing to truly and effectively represent Gaza’s fishermen.

Palestinian fishermen undergo attacks on a daily basis by the Israeli occupation forces, which violate fishermen’s basic right to work freely without fear or intimidation. This shows the absence of justice under the biased international capitalist system which supports the Israeli occupation. Therefore, resorting to social movements, associations and unions around the world – and especially left-wing, progressive and liberation movements – is the best option for obtaining support, advocating for fishermen’s rights, and exposing the unjust, inhumane and brutal Israeli practices. This can be enhanced by joining international alliances, networks and movements, and especially those related to fishermen. It is a sad fact that Gaza Fishermen’s Association is not an active member in any regional or international networks and movements related to fishermen or association/union work, and it never took a single initiative to do so.[5]

Most fishermen in Gaza see that the Association only provides some services through fishermen-related projects, while choosing project subjects in an isolated manner without following any criteria or standards. Also, the Association rarely announces a project and registration dates, and hardly ever gives an opportunity or sufficient time for fishermen to benefit from their projects.  Within this framework, several donor organizations intentionally or unintentionally became partners and contributors in violating fishermen’s rights and exploiting their vulnerability and urgent need for support. The Association’s projects also lack monitoring, follow-up and evaluation, as well as failing to properly audit the lists of beneficiaries and examine the latter’s eligibility and the fulfillment of requirements. This enabled some people to claim to be representatives of (both formal and informal) fishermen’s representative bodies, along with identifying needs and selecting beneficiaries without any oversight or accountability. Some donors also succumbed to the desire of Gaza Fishermen’s Association to make membership in this Association a pre-requisite for providing any support to beneficiaries. Hence, by making membership in this Association obligatory, many donors violated people’s freedom of association, which is a basic principle in association work.

Fishermen spoke with great grief and sadness about the injustice in some projects due to the lack of transparency and inequitable distribution, failure to apply certain criteria and standards, and selection on the basis of personal considerations. Unfortunately, the donors also partake in this injustice due to their failure to monitor and follow up corrupt practices by implementing parties and official bodies, as well as refraining from holding violators accountable.

It is worth noting that several new structures and bodies were created due to the absence of a union that cares about fishermen’s concerns, protects them from injustices, and supports their causes at the local, national, and international levels. These bodies were more empathetic to fishermen, and they cooperated with them to make their voices heard and demand the fulfilment and protection of their respective rights. These structures and bodies even managed to represent Gaza’s fishermen in global movements and bodies. For example, Gaza’s [voluntary] fishermen committees – which are spread across the Gaza Strip sea – performed several tasks and roles that theoretically should have been performed by Gaza Fishermen’s Association. Therefore, these committees improved fishermen’s conditions and advocated for their rights. However, the said committees do not have an official status to represent fishermen, but they are expected to create an alternative to the Association by establishing a new association/union or official representative body for fishermen.

These committees have constantly protected fishermen’s rights and put their demands on the forefront, as well as encouraging them to stand up against injustice and object to those neglect and underestimate their needs and pains. Hence, fishermen started playing more active roles in different spheres, such as organizing sit-ins and solidarity protests. For example, in the end of 2016 – beginning of 2017, Gaza’s fishermen successfully organized the first solidarity campaign to advocate for fishermen’s rights, which forced the Association to hold elections. This took place after carrying out a set of effective steps, such as collecting the signatures of nearly 1,700 fishermen in a petition that urged governmental and legal parties to force the Association to hold elections, which eventually took place despite the different harassments and detentions.[6]

Gaza’s fishermen are living in a terrible condition and a painful reality. For example, more than 80% of Gaza’s fishermen live below the poverty line[7] and are unemployed, and most fishermen’s households largely depend on aid and food parcels from various organizations. This situation led many fishing sector activists and fishermen to believe that establishing a strong independent, progressive and democratic union/representative body is a requirement for improving fishermen’s conditions and providing adequate support. It was also seen that this union should be administered by an elected body comprised of fishermen, where decisions are made democratically and the desired changes are brought about to fulfill fishermen’s needs and aspirations. This union/body must have sufficient knowledge and familiarity with everything related to fishermen (including data and information) and should effectively motivate fishermen to become more involved in union life. This can help protect fishermen’s rights and adopt a demand-based program that advocates for these rights and creates a good foundation for a decent life. This union/body should also augment the role of fishermen in national and societal issues and strengthen their involvement in building the society on the basis of equality, participation and social justice. Moreover, it is important for this representative body/union to mobilize Arab and international solidarity with the fisherman’s cause, by acceding to international networks and unions related to fishermen, as well as learning from the experiences of other parties. Joining these parties can effectively enhance the union/representative body’s ability to file international lawsuits on behalf of fishermen, in order to hold Israeli leaders accountable for the committed crimes against Gaza’s fishermen. This can eventually eliminate the perpetrated crimes and compensate fishermen for their suffered damages. It is also important to find new ways of exerting pressure on local, national and international organizations to support the real needs of fishermen and protect and develop the fishing sector. Furthermore, it is imperative that fishermen play a pivotal role in identifying needs, formulating plans, developing projects, preventing violations of fishermen’s rights, detecting cases of financial squandering, enhancing transparency and accountability, and ensuring the optimal use of resources and other support received by the fishing sector.

[3] Statistics of the Ministry of Agriculture, General Fish Wealth Administration, 2019.

Rosa Luxemburg Stiftung is one of the major institutions of political education in the Federal Republic of Germany. It serves as a forum for debate and critical thinking about political alternatives, as well as a research center for progressive social development. It is closely affiliated to the German Left Party (DIE LINKE). The Rosa Luxemburg Stiftung Regional Office of Palestine and Jordan has supported partners in Palestine since 2000, and established the Regional Office in Ramallah in 2008. Today, the office is in charge of project cooperation with partners in the West Bank, East Jerusalem and the Gaza Strip, as well as in Jordan.