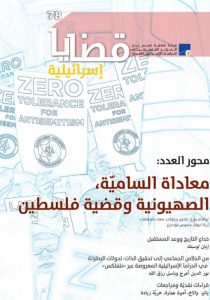 The Palestinian Forum for Israeli Studies (MADAR) recently released Issue no. 78 of “Qadaya Isra’iliya” (Israeli Affairs) quarterly journal. This issue includes a file titled “Anti-Semitism, Zionism and the Question of Palestine”, which thoroughly discusses the transformations that befell the concept of Anti-Semitism, where the term was recently expanded by Israel and its allies to include any criticism of Israel and its policies in order to eliminate the discourse of justice of the Palestinian cause. In this file, there is a discussion of the process of expanding the term “Anti-Semitism”, along with specifying the active parties and adopted tools for propagating the new definition internationally.

In another study titled “The New Anti-Semitism as Part of the Clash with the Just Palestinian Cause”, Dr. Mohanad Mustafa carefully examines and analyzes the Israeli polemics related to the term “Anti-Semitism” and limiting this term to the Palestinian cause.

The article starts by mentioning the controversial decision of the French Parliament, which considers that any objection to Zionism is a form of Anti-Semitism. The article also poses a question about the essence of Zionism in Israeli polemics and the kind of Zionism that one should object to. This is part of the wider political and ideological debate in Israel regarding the monopoly over interpreting the meaning, role and purpose of Zionism.

In an article titled “Colonialism and the Jewish Holocaust: A Clash Between Two Narratives”, Prof. Amos Goldberg examines the emergence and development of two great historical narratives that came to explain the nature of modernity. Both of these narratives are related to historical disasters; the first being the Holocaust and Anti-Semitism and the second being colonialism, post-colonialism and western racism. The researcher sees that these two narratives, which have become universal to a large extent, have deep roots in the history and thoughts of different regions around the world. However, these two global narratives greatly clash with one other when it comes to the Israel-Palestine issue.

The file also contains an article titled “He, I and the Other” by Avraham Burg. In this article, Burg mentions that “Just like others, we have some real haters. They do exist and are disturbing and sometimes destructive, but they are marginal and insignificant. Israeli leaders also refer to some “invented haters” to feed the traditional Jewish fears and continue imposing their control through this tactic. Many Jew-haters actually wear the mask of friendship. This is not because they suddenly fell in love with us but because they want our authorization to express their hatred towards another group. They love the Jews in order to hate the Muslims. They are new “Philo-Semites” for the service of Islamophobia. Unfortunately, many Israelis and Jews fall in this time trap”.

In this issue, the section titled “From the Archive” presents two texts by poet Nathan Alterman which were translated by Malek Samara. One of these texts criticizes a massacre which is most likely the Dawayima Massacre, while the other text glorifies the Occupation of 1967.

This issue also includes an intervention titled “From Collective Salvation to Self-Realization: Transformation of Heroism”.

In this context, Nour Al-Deen Araj and Basel Rizallah present samples of Israeli film productions on Netflix which have military representations either in a central or a secondary manner. These works were analyzed closely in an effort to view the significance of the military dimension in the Israeli public space and examine its current decline and the attempts to restore it in the midst of the ongoing transformations in the Israeli society and military community. This intervention examines the image of the Israeli soldier in Israeli film productions where he is portrayed as a superhero who saves the society and his friends on the basis of the traditional image of a heroic and masculine soldier who sacrifices himself for others. The intervention also highlights some patterns of internal disagreement in Israel and mentions several crises, such as the decreasing recruitment rates in combat units and the Israeli soldiers’ authorities and decision-making power. The intervention also includes discussions about the effectiveness, or lack of effectiveness, of having a “people’s army”.

Issue no. 78 also includes an excerpt from the last chapter of Ian S. Lustick’s book under the title “Deception of History and the Promise of the Future”, which discusses the outcomes of the two-state solution in the current reality of the Palestinian cause.

The book highlights the changes in the different political plans and projects and analyzes how the desperate “Iron Dome” strategy forced the Arabs to give up many of their demands, whereas the partial success of this strategy led to some unintended consequences, such as the amplification of Jewish-Israeli demands. This strategy also encouraged an intransigent Zionist fanaticism that destroyed every possibility of a historic compromise that was supposed to be achieved.

According to this book, the perception of a disaster, which became a dominant view in Israel, greatly undermined any potential peace with the Arab countries because this perception intensified the feelings of fear, suspicion and hatred and made “compromise” a curse word. The great success of the Israel Lobby in the United States, fueled in part by the perception of a disaster, led to a substantial support for Israel. The unintended consequence of the excessive influence of the Israel Lobby was the destruction of any hopes for political moderation in Israel and it turned the Jewish State’s policy towards rejectionism. This put the final seal on the destruction of the two-state solution, and it brought in more Palestinian Arabs than Jews under the jurisdiction of Israel.

Issue no. 78 also includes a number of critical readings and reviews, along with some recent Israeli publications.