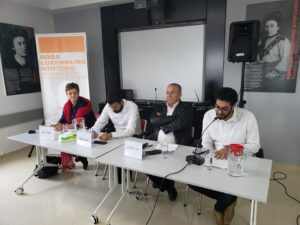 On Wednesday, the 23rd of October 2019, the Rosa Luxemburg Stiftung office in Ramallah held a seminar examining the results of the Israeli elections on Palestinians. The seminar highlighted on the events subsequent to the Israeli elections and probed into the potential scenarios in the case of failing to form the Israeli government, and the possibility of holding a third round of elections.

The speakers of this seminar were Dr. Honaida Ghanem, General Director of the Palestinian Forum for Israeli Studies (MADAR); Adv. Ahmad Khalifa, Member of the Central Committee of the Abnaa el-Balad movement; and Mr. Nihad Abu-Ghosh, Israeli Affairs Expert and Director of Al-Masar Study Center.

Dr. Honaida Ghanem opened the seminar by discussing the recent attempts to form the Israeli government after Benjamin Netanyahu’s failure to do so and following the appointment of the Blue and White alliance Chairman Benny Gantz for this task. She noted that the latter is expected to fail in forming a government, and that a third election will likely take place in March 2020. Moreover, Dr. Ghanem clarified that the latest Israeli elections’ composition gives neither the Liqud party nor the Blue and White alliance any advantage over each other. She also explained that the Israeli opposition has no set agenda other than wanting to oust Netanyahu on the premise that he has harmed the spirit of the Zionist state.

On his part, Adv. Ahmad Khalifa analyzed Netanyahu’s policies in the last two decades and looked into their relation to the current Israeli elections. Khalifa explained that “Netanyahu’s policies have not only created a majority-minority issue, but they have also presented a crisis in the essence of the Zionist project for the upcoming period.” Adv. Khalifa also delved into the Palestinian reaction to the Israeli elections, stating that “we have overly relied upon the Israeli elections instead of exerting our efforts to empower ourselves through resistance.”

Furthermore, Khalifa criticized the Joint List’s discourse for only being focused on ousting Netanyahu. “The Palestinians – neither in the West Bank nor in the 1948 areas,” he added, “do not influence Israeli policies anymore. The Israelis used to take us more seriously and were more likely to change their stance when we had strength in the land, but our power has now diminished.” Adv. Khalifa concluded by stressing the importance of a unified Palestinian political project and the need to resort to the Palestinian National Charter which gives a certain horizon for the Palestinian struggle.”

Nihad Abu-Ghosh pointed out that it is wrong to blame the Palestinians of 1948 for legitimizing the Occupation. “Erroneously accusing the Palestinians of 1948 of legitimizing the Occupation is a mistake,” he added. He also mentioned that “the First Intifada showed the real face of the Israeli society, as reflected in the Israeli elections of 1992.”

During his analysis of the Israeli election results, Abu-Ghosh demonstrated that “some Israeli voices came to realize that Netanyahu poses a serious threat to the Jews themselves. We see great similarity between the practices of Netanyahu and those of Fascist parties – especially in their enmity against other nations. This will ultimately undermine the foundations of Israel’s power and refute its claims of democracy and prosperity. More Israelis are starting to realize this danger.” Abu-Ghosh also mentioned that there was a strong emphasis on Palestinians in the Israeli parties’ agendas through promises of more settlement expansion, annexation, and discriminatory policies of segregation.

Sari Harb, Director of the International Dialogue and Solidarity Programme, noted that this seminar comes in light of the Foundation’s aim of providing the space for political and social dialogue. Due to the important political consequences of the Israeli elections on Palestinians, he mentioned that “political awareness is one of the most important objectives of Rosa Luxemburg Stiftung both in Germany and globally. We held this meeting today to discuss a political event, namely the Israeli elections which might take place for a third time in the coming months, and their tremendous impact and consequences on Palestinians. Israel with its political regime is undergoing what some would call an ‘elections crisis,” as it is caught up in a relentless elections marathon.”

This seminar was held as part of the International Dialogue and Solidarity Programme implemented by Rosa Luxemburg Stiftung, a German Foundation that has been working in Palestine since 2008. The Foundation aims to enhance political awareness and social criticism; encourages the critical analysis of societies; and sponsors networks that promote liberal, political, social and cultural initiatives through a number of programs which emphasize the topics of liberal education, economic and social rights, and solidarity and international dialogue.