Position Paper: What Kind of Palestinian Economy is Needed in light of the COVID-19 Crisis?

The outbreak of the Coronavirus Disease 19 (COVID-19) showed the vulnerability of social welfare and healthcare systems in many developed countries and highlighted the risks of continuing with the current global economic approach. This approach was heavily criticized by several think tanks, research organizations, social movements and United Nations organizations.

The current global economy is based on making profits and ensuring the free movement of money, investments and goods without any economic, tax and social obligations towards the countries in which the profits are made. This economic model failed to address the crisis that accommodated the COVID-19 pandemic. It was also seen that public spending priorities in most capitalist countries are in dire need of revision and reorientation and to move away from excessive military expenditures and rigid public administrations to spending more on research and development activities pertaining to social priorities, as well as increasing expenditures on the health, education and social protection sectors. In spite of the great feelings of optimism regarding the emergence of an alternative economic and social path after this crisis, these developments are not guaranteed to take place and they need a lot of hard work and activism.

Under a state of colonialism, Palestine is having a hard time confronting the COVID-19 pandemic. Despite the various measures adopted by the Palestinian Presidency and government – including the declaration of a state of emergency and the imposition of a mandatory quarantine – the Israeli occupation remained the number 1 threat to the health of Palestinians. Among their policies was to admit the Palestinian workers inside the Green Line in a way that caused confusion for the Palestinian Authority (thus deeming matters uncontrollable). This reflects the Israeli desire to make the Palestinian economy subservient to their economy, and it shows the importance of Palestinian emancipation from dependency and restrictions if we desire to be liberated. Despite the Palestinian government’s launching of a short-term economic plan called “The Economic Clusters Plan”[1] in an attempt to disengage from the Israeli economy (and which was welcomed, albeit cautiously, by some economic sectors and institutions), there were fierce reactions from the Israeli side and a strong opposition from internal economic lobbying groups whose interests may be affected as a result of this disengagement.

Although it is a bit early to indicate the lessons that were learned from the emergency crisis and the Palestinian government’s dealing with it, it can be said that, based on its currently stated priorities, the Palestinian economy is in need for a serious restructuring to ensure that major social and economic breakdowns will not take place in the Palestinian society as a result of successive events and crises. The following is an outline related to the restructuring process: –

First: The need to develop resilient production sectors that can employ a large workforce and attain a margin of profit with the achievement of development in a targeted manner, i.e. central planning of this developmental process.

Second: To focus on micro, small and medium-sized establishments (which are the most widespread category and they employ the largest number of people[2]) by providing them with financial subsidies, grants and other forms of assistance to prevent the closure of their business as a result of the accumulated losses stemming from the state of emergency. Moreover, and contrary to the currently existing policy, there should be the formulation of a well-targeted developmental policy that supports these establishments.

Third: Develop agriculture and livestock in a way that enhances sovereignty over food and crop diversification. This should be done by re-orienting the government spending and playing a more active role (instead of merely being the “regulator”) in agricultural cycle planning, as well as focusing on the cultivation and restoration of neglected agricultural lands and developing the used agricultural techniques.

Fourth: To redirect the government spending, which is the second largest spending after household spending and the most concentrated form of spending. This can be done by decreasing the security sector expenditures (such as petty cash and rent), fighting corruption (which causes tremendous financial losses) and increasing expenditures on more vital economic and social sectors such as health, education and social protection. The latter sectors proved to be ineffective during the COVID-19 crisis and they failed to include all society members.

Fifth: To tackle the lack of justice in the Palestinian tax system[3] and highlight its defects; and especially since taxes are the main source of revenue in the Palestinian government. Although the Palestinian taxes are closely related to the Paris Economic Agreement and the clearance tax, it is now important to restructure the tax system to achieve justice, as well as withdrawing from that unpopular agreement. This would lead to collecting higher tax revenues from persons who make higher profits and revenues and reducing the tax burden on the ordinary citizens who are currently bearing the burden of financing the government and its expenditures.

Sixth: The crisis that resulted from the state of emergency showed that the calls for help by the government to the largest Palestinian private sector companies and the establishing of the “Wakfet Izz” fund to confront the crisis did not receive the expected support in terms of the amount of donations and contributions in the fund. Also, some of these donations came in the form of in-kind materials, which might not correspond with crisis-related needs that the fund was created to tackle. The bottom line is that the policy of favoring the private sector by giving them monopolies and privileges, shaping the Investment Promotion Law in accordance with their interests and desires, and freeing them (i.e. the private sector) from tax burdens must stop in order to preserve the economic and social well-being of the Palestinian society. The latter can no longer pay the price for the benefit of a small influential elite that controls most components of the (unproductive) Palestinian economy as they aim to make greater profits at the expense of citizens’ livelihoods.

Seventh: Education should be again at the center of the society’s attention. This can be done by developing and revolutionizing the field of education, allocating sufficient budgets to support the educational process and academic institutions, and to designate adequate budgets for research and development activities in the field of natural and social sciences because of their positive impact on developing all spheres of life in the Palestinian society.

Eighth: Restructuring the Palestinian National Fund (PNF) and the Palestine Investment Fund (PIF) in the framework of public accountability and to ensure that the investments and resources of these funds are used for serving the above-mentioned priorities and areas. Moreover, there is a need to clearly specify the relation between these funds and the major beneficiary companies.

Ninth: Arab and international funding and support must be consistent with the priorities of the Palestinian national liberation based on an emancipatory development plan that has clear and targeted priorities in consensus with all actors in the Palestinian society. This should be done without any dictations, political requirements or restrictions on the use of funds in order to develop the vital economic and social sectors. In this respect, it is worth noting that the U.S. funding was interrupted after a decision from the Trump administration. However, no major negative effects were seen in the Palestinian society after this “isolation” decision despite their aim to achieve “economic peace” at the expense of Palestinian national rights and developmental priorities. It is also necessary to strengthen the level of knowledge exchange and technological cooperation in the scientific and social fields to transfer know-how and employ that on the Palestinian level.

Tenth: The creation and development of a social protection system starts by adopting a fair and comprehensive social security system that is managed with a high level of transparency and integrity. This will also be considered as a refuge in times of crisis and emergency.

We must get rid of all liberal policies that were introduced in the last 15 years and which accepted and empathized with the occupation. These policies also tried to “normalize” poverty and marginalization by considering them a “normal” byproduct of our reality. Therefore, the marginalized groups, poor households and deprived areas must be at the heart of every emancipatory development process.

The tackling of the current crisis showed us a good picture of the reality away from the day-to-day hustle and bustle. This provided us with an in-depth view of the biggest crisis; which is living under a ruthless occupation and at the same time witnessing weak Palestinian governmental structures which aim to implement policies that will only lead to more marginalization, impoverishment and the accumulation of wealth at the expense of almost everyone else. This crisis therefore gives us the opportunity to reflect on and correct some of the policy-related mistakes in a quest for building a developed economy that is characterized by social emancipation. The opportunity is still available at this point! 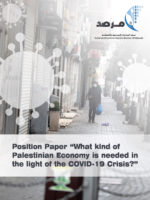