The U.S. Elections and the Question of Palestine 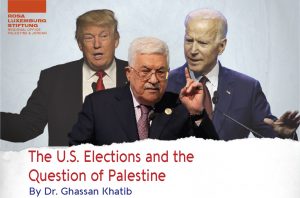 Palestinians and the rest of the world are following the current U.S. elections with unmatched curiosity. This special interest is due to the sharp difference between the two political parties and their candidates’ stances on various issues, including the Middle East and the Israel/Palestine conflict.

Quite often, both Republicans and Democrats had competed over who will provide greater support to Israel. However, the current Republican administration, under Donald Trump, went so far in its bias that it exceeded all previous U.S. administrations – republicans included – in its favoritism toward Israel.

Trump’s administration differs from previous U.S. administrations in their relationship with Israel in three aspects. First, it put an end to its commitment to the Oslo Accords. A stark example of this was the U.S. recognition of Jerusalem as the capital of Israel and the Embassy move to it. This was done despite the fact that the Oslo Accords – signed by the US Secretary of State – stipulated that the future of Jerusalem be determined by negotiations.

Secondly, the Trump Administration supported Netanyahu’s calls for reversing the premise of the political process by first normalizing the Arab-Israeli relations and then attempting to unilaterally solve the conflict. This dismissed the peace process prelude as the way to end the Palestinian-Israeli conflict before facilitating and establishing Arab-Israeli relations.

Thirdly, the current Administration waged an economic war on Palestine by stopping all U.S. aid – including humanitarian assistance – to Palestinians. It also extended pressure on its allies – including Arab states – to stop all types of financial aid to the Palestinian people. This put the Palestinian Authority (PA) and the Palestinians of the Occupied Territories in the worst economic condition since the establishment of the PA.

Another shift in U.S. policy towards the Middle East – which had an indirect but tremendous impact on the Palestinian cause – is its policy towards the Gulf countries. This included the U.S. withdrawal from the Iran nuclear deal. On the one hand, this caused tensions in U.S. relations with Iran, and pressured Arab Gulf states (which feel threatened by Iran) to establish relations with Israel on the other. This greatly undermined the Arab Peace Initiative and the Arab official position, which had been a key source of political, diplomatic, and financial support to the Palestinians.

The Palestinian leadership may have rapidly realized the gravity of this U.S. policy. In an attempt to mitigate the ramifications and delegitimize those political actions (especially the so-called “Deal of the Century”), the Palestine Liberation Organization announced that it would cut ties with the U.S.

Ultimately, there have been numerous U.S. reports indicating that – perhaps as a backlash against republican extremism – the Democratic Party is taking on more balanced and les biased directions.

It should be noted here that the internal policies of the Trump administration have fueled racism in the United States. This prompted many American Jews (among others) to have reservations about the Republican Party and to strengthen the support of the Democratic Party. Although the latter has less exaggerated tendencies in supporting Israel, yet many Jewish-American circles are worried that the joint Trump-Netanyahu policy will eliminate all opportunities for a two-state solution and might endanger the Jewish democratic character of the State of Israel.

Based on some preliminary indicators, it seems that Trump’s success in the upcoming elections will encourage Palestinians towards achieving national reconciliation and enhancing their resilience. These are essential steps in the face of the upcoming challenges. After all, if Trump wins the second term, chances are that the hostile policies against Palestinians will increase, as will the U.S. bias to Israel.

It could be in preparation for such a scenario that the Palestinian leadership has seemingly taken a new diplomatic approach to expand and diversify its regional and international diplomatic relations. An example of this is the Palestinian-Turkish rapprochement, which brought discomfort among some Arab allies of the U.S. On a broader level, some Palestinian statements have indicated the intention to strengthen ties with international powers such as Russia and China – despite the fact that these countries have proved to be reluctant stakeholders in the Middle Eastern political process.

With that said, the local and international press that covered the unexpected visit (on Saturday, 10 October) of Ronald Lauder, President of the World Jewish Congress, to Palestinian President Mahmoud Abbas in the Ramallah Presidential Headquarters was revealing. In the event that Biden wins the presidency, the Democratic Party – including the American Jewish Community therein – will have a different game plan for the U.S. policy on Israel-Palestine and might aspire to develop a different kind of relationship.

Biden’s victory will not undo Trump’s actions. It will rather constitute another challenge for the Palestinian leadership to make concessions. That might be a price required by the new administration in order to move the file. In other words, all of Biden’s attempts will have to follow the Israeli condition of resuming negotiating with no preconditions whatsoever; not even as basic as halting settlement expansion (which is a prerequisite for Palestinians).

It is crucial to self-assess and strengthen the Palestinian internal factors in preparation for either Trump’s or Biden’s victory. Knowing that the external (largely due to the internal) pressures are on the rise, it is vital to merge the two and work toward reconciliation prior to the potentially-dangerous U.S election results. Although the Palestinian political elites’ reconciliation talks, recently launched in Istanbul, are distinctly (albeit unjustifiably) more serious than before, yet these talks are still very much politicized: For example, convening the meeting in ‘Turkey’ is a political message to ‘Saudi Arabia,’ moving toward a ‘Fatah-Hamas reconciliation’ is a message to ‘Israel and the United States,’ and ‘instilling the hope for reconciliation’ is a message to the ‘local public’ craving for such unity.

The U.S. administration’s efforts for Arab-Israeli normalization and neutralization of international organizations and international law have fundamentally deepened the imbalance of power. As experienced before, such imbalance will surely hinder the political dynamics following the elections. To put it bluntly, the Palestinian leadership has a very narrow space to maneuver in the short-term, whereas the only political card that it can play is its mere existence. This is because all U.S. administrations, regardless of their exact relationship with Israel, will deliberately need some type of Palestinian authority that they would oblige acceptance of all arrangements in return for its survival. It is only the absence of such an authority (i.e. one which accepts their arrangements) that will prevent the United States and Israel from achieving their desired aims. Meanwhile, others (who recall how the PA was punished by not receiving its entitled tax funds) believe that severing the relations and coordination between the PA and Israel could be far worse.

In conclusion, the results of the upcoming U.S. elections might introduce a different U.S. foreign policy, including that which relates to the Middle East and the future of the Israeli occupation in the Palestinian Territory. However, in order to seize opportunities from the U.S. elections’ results and face the challenges ensued therein, it is pivotal for Palestinians to enhance their currently challenged internal coherence and unity. 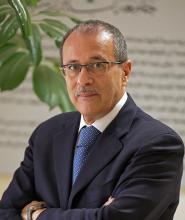 Dr. Ghassan Khatib is a lecturer in cultural studies and International Studies at Birzeit University. He has served as Director of Government Media Center in 2009-2012 and Palestinian Minister of Labor 2002-2004 and Minister of Planning 200-2006. Founder and director of the Jerusalem Media & Communication Centre.