Annexation Beyond the Discourse of One State and Two-States 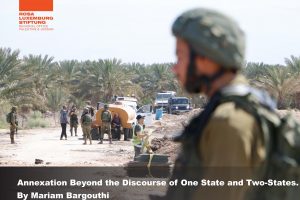 The echoes of condemnation on the call of Israeli prime minister, Benjamin Netanyahu, to formally annex almost one-third of the West Bank are beginning to dwindle. For the most part, many have been waiting to see what the Palestinian reaction would be rather than dealing with the issue at hand. In narrowing the much larger problem of the Israeli occupation down to the political definition of “annexation” garbles the focus on the illegitimacy of Israeli practices as a whole.

This type of fixation on discourse while dismissing the core issues is not surprising given the historical trajectory by which the Palestinian struggle has been neglected in the international diplomatic scene. After all, the British Empire had been the one responsible for green lighting Palestinian dispossession and displacement in the first place with the Balfour declaration of 1917.

With this in mind, the time factor is essential. Indeed, the Balfour declaration of 1917 legitimized the creation of a Jewish homeland in Palestine, but it was only 30 years later that Israel would be created as an internationally recognized state. Similarly, today’s consequences of calling to formally annex parts of the West Bank is not limited to what it would entail in the near future, rather how it will manifest decades from now. The endeavor to formalize annexation today means that in some years’ time, Palestine (and Palestinians) may well become a historical record, at best. Although this prospect may sound alarming, it is important to also recognize that the Palestinian memory of Israel is relegated to referring to it as “historic Palestine.” And yet, even that is a rare occurrence, seeing that Israelis prefer to avoid the mention of ‘Palestine’ all together. With Israel’s long-term re-structuring of memory in mind, one can see that continued annexation is not merely about taking over Palestinian lands and resources. It is, in actuality, an Israeli promise that the ethnic cleansing of Palestinians will persist until there is no more Palestine.

Annexation through the Intersections of History, Present, and Future

The challenge of discussing today’s annexation call is to place it within its contemporary, historical, and predicted context. Historically, the forging of an Israeli state required the forced takeover of Palestinian territory. The fact that Palestine was under the control of the British Mandate from 1920 until the declaration of the Israeli state in 1948 is a clear indication that foreign claim over lands was a historically normalized interaction.

As states across the world liberated themselves from colonial powers, Palestinians contrastively found themselves further buried under it – largely due to the nature of settler-colonialism which forebode the impending realities on the ground. After all, the manipulation of the phrase “A land without a people for a people without a land” by early Zionist leaders was not only strategic for legitimizing the mass dispossession in an era where documentation and media were still scarce, but it also foreshadowed that the land’s identity will be forged through a Zionist, and later Israeli, vision for the future. The Israeli practices which followed (from the prison complex to the violent raids on Palestinian homes, and even the creation of an Israeli justice system that is discriminatory against Palestinians) served the fulfillment of that purpose.

For decades, Palestinians have challenged settler-colonial expansion, yet the international community seems to have favored ‘diplomatic correctness’ over the facts on the ground. The international community, all things considered, still hesitates to acknowledge the history surrounding the creation of the Israeli state, largely due to Israel and its allies’ criminalization of those who support the Palestinian struggle. As a result, the world has acquiesced to this pressure and went as far as adopting laws against the Palestinian-led boycott, divestment, and sanctions movement; a movement that is non-violent, with a goal of securing basic rights for Palestinians. In accordance, uttering the word “colonial” with regard to Israel has become considered more criminal than imposing a full-blown military occupation against a civilian population.

For years, Israel has been careful to ensure that no international intervention impedes its efforts. An example of this is in how Israel did not formally endorse settlements as part of “Israel proper” in the past due to their illegality in the international legal framework, and knowing that formally recognizing the settlements may have made it more difficult to continue its expansion. Meanwhile, the international community did not care to hold Israel accountable for its actions. Regardless of words, however, Israel has in fact gone ahead and “officially” annexed the West Bank, the Gaza Strip, and the Golan Heights since 1967. If evicting Palestinians from their homes, taking land by force, and dispossessing entire communities at large does not constitute as formal annexation, what does? If the traumatic, tragic, and terrifying practices of Israel are to be reduced to how they appear on paper, then one must at least recognize that condemning Israel through paper means nothing if action on the ground contradicts it.

It is within this context of negating justice that Israel is further emboldened to pursue its territory expansion across Palestine while simultaneously suppressing Palestinian support abroad. Palestinians, after all, are being arrested for simple acts such as writing poems about oppression, while Israeli soldiers purposely sniping Palestinians down continue to enjoy their liberties.

Against this background, the call to formally annex the West Bank is not the only act that should be condemned, but so is everything which encapsulates of daily violence. The frustration and disenchantment of the Palestinian people towards the latest call to annexation is exactly due to the fact that it is simply the “latest.” From their end, Palestinians are well aware of the history where injustice occurred ad nauseum, and they know that if unimpeded, this will continue to happen while they pay the heavy price of being left homeless, violently abused, and stripped of any tools for protecting themselves. The fact that the Israeli government is undertaking this annexation move in light of a global pandemic that is threatening everyone is thus unsurprising, given the backing of the racist and unjust Trump administration that is also violently repressing Black uprising in the US. All of those factors demonstrate that political goals do not align with the preservation of human life.

The main concerns that were expressed regarding Netanyahu’s call for annexation seem to have focused on rhetoric. Somehow, the main issue was limited within the framework of “killing the two-state solution,” and thus got reduced to one-state and two-state solutions. Such fixation on rhetoric implicitly negates Palestinian rights for return, reparations, and corrective intervention to compensate for all the losses already suffered.

Besides the pains of being dispossessed as a community, annexation also entails elements that impact daily Palestinian life due to Israeli settler-expansion. An example of this is how the little lands that remained in Palestine have turned into dumping grounds, and how access to them is restricted. Such details, often overlooked, negatively impact Palestinians’ physical health and ability to utilize resources for self-sufficiency. To put it bluntly, even when Palestinian homes are not actually overtaken, daily life is still turned into a living nightmare by Israeli settlers aiming to drive Palestinians out.

Among the many other examples of settler violence and military raids of armed Israeli soldiers is how Israeli settlers, in 2015, torched the home of the Dawabsheh family, killing 18-month Ali Dawabsheh and his parents, Saad and Riham. Every Palestinian knows that when they are to confront such invasions, they will ultimately be shot at with live ammunition, teargas, and plastic coated-metal bullets. Even Palestinian children are not spared from this harsh reality. Almost 500-700 children are detained annually by Israel, only to be tried in military courts with their rights relentlessly stripped from them. There is no question that Israel has created generations of traumatized Palestinians.

While rhetoric may take precedence over political arrangements, the details on the ground clearly showcase that Palestinians live in neither a one-state nor a two-state reality. Their main concern is simply trying to survive on their lands in the face of a military power imposing itself on them by any means possible. The survival mode is ongoing in the midst of a fourteen-year long siege on the Gaza Strip, a labyrinthine system of military rule in the West Bank where towns and cities are divided by illegal Israeli settlements and military checkpoints, a disregard of Palestinians with Israeli citizenship who are treated as second and third class citizens, and not to the mention the refugees who have become scattered across the globe. This entire intricate system of oppression neither begins, nor ends, at the call for annexation.

The debate over a two-state solution has been nothing but a tool for protracting real and genuine international intervention. Nowhere in the two-state solution discourse is there any mention of the Palestinian refugees, whether in exile or internally displaced. There is also no talk about Palestinians with Israeli citizenship, or confrontation about the day-to-day violence imposed on Palestinians and their denial of access to their natural resources, all the while attempting to erode Palestinian culture and history. Simply put, the discussion over one-state and two-state solutions forgets to address the most fundamental component, which is the colonization. This is largely due to the nature of diplomatic discourse, which is so entwined with citizenship rights and border control that the basic concepts of freedom, justice, and dignity become marginalized to “activist speech.” Adding to this, diplomatic attempts for solutions are limited to a tunnel vision of band-aid solutions that address symptoms rather than root causes. As such, the concept of peace ends up being about ensuring that Palestinians are not “rioting” rather than targeting the reasons (i.e. dispossession) that is leading the Palestinians to protest in the first place. 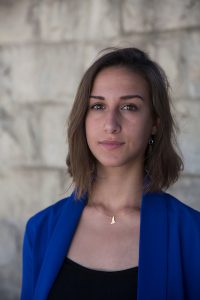