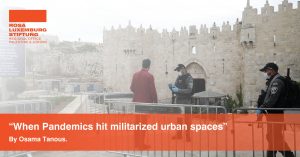 The dream for there to be a Jewish majority in the ‘eternal, undivided capital’ of the Jewish state has made East Jerusalem and its Palestinian population a special target to Israeli state violence in a more complex way than in different parts of the Occupied Palestinian Territories. The declared demographic strategy of “Judaization” of space was translated into a brutal regime of surveillance and state violence towards resources, land, and everyday life.

The practices of Israeli state violence have had different speeds, ranging from fast military house raids and home demolitions to slow constructions of tunnels, roads and walls. Those measures have ultimately dismembered and fragmented Palestinian communities and habitats. They have generated several enclaves of militarized urban spaces by which to contain an undesired surplus population – a seemingly security threat that is to be exploited, ill-treated, and surveilled. On a bureaucracy level, Israel considers most segments of the native non-Jewish Jerusalemites as residents with no citizenship, while others lack even that form of status. Violent bureaucratic practices, such as revocation of residency statuses and the prevention of family reunification laws, add layers of exhaustion to the lives of Palestinian Jerusalemites. On top of their daily obstacles, they have to continuously prove to the occupier that they actually have a right to live in their city; that they are not infiltrators or illegal residents. Over the past four decades, the residency status of more than 14,595 Palestinians has been revoked.

In order to better grasp the context of the Occupied East Jerusalem (OEJ), it is worth considering the state functions as identified by French sociologist Pierre Bourdieu, who urges us to understand state functions as two main categories: the right hand and the left hand of the state. The right hand of the state is the punitive one in charge of police, justice, and regulatory operations that control deviance and enforce discipline. Meanwhile, the left hand serves the therapeutic function such as education, healthcare, food support, public housing, and social assistance that protect and expand life choices; providing relief to vulnerable people. Ideally, these two hands work synchronically, like the swift hands of pianists. In OEJ – the intersection spot for militarism, capitalism, racial and religious politics – these hands seem to work more like the two hitting hands of an abusive ruler.

When it comes to healthcare, the well-celebrated Israeli national health insurance law supposedly provides universal healthcare to all residents – not only citizens of Israel – on the basis of justice, equality and mutual assistance. It also seemingly requires healthcare organizations “to supply all the services enumerated in the standardized basket, within reasonable time and distance from the insured persons homes.” However, the daily reality of life behind checkpoints and walls make these governmental assurances a cynical joke. When examining accessibility to healthcare, a research article that was conducted on this subject already 20 years ago (long before the construction of the separation wall) demonstrated that Jews are 2.4 times more likely to use ambulatory care than Palestinians. With that said, the total cost of medical care for Palestinians was almost half of that for Jewish population in Jerusalem. The article summarized that the constant fear, tension and hostility (among other factors) that they are subjected to, combined with curfews and checkpoints, create alienation among Palestinians in Jerusalem and make medical care less accessible for them. Yet that is not all. Naturally, the health of a population is not solely determined by the limited access to healthcare infrastructures. In her Ecosocial Theory of Disease Distribution, professor Nancy Krieger details how racial/ethnic health inequalities that result from exploitative and repressive social relations become embodied due to social trauma, economic and social deprivation, and inadequate medical care, and bring about a harmful response to discrimination, land alienation and ecosystem degradation. Not surprisingly, the Palestinian population in Jerusalem has much higher illness and a lower life expectancy than the Jewish population.

Disasters in conflicted areas are always tricky and reveal multiple contours of power relations. In describing the floods in Indian occupied Kashmir, author Arundhati Roy wrote: “A drowned city was a spectacle. A drowned civil war was a phenomenon…. news anchors marveled at how much brave Indian soldiers were doing for ungrateful, surly Kashmiris who did not really deserve to be rescued. When the flood receded, it left behind… an ungrateful, surly people who had survived without being rescued”. The COVID-19 Pandemic in Jerusalem was nothing short of a phenomenon that revealed two main attitudes:

It is important to mention that even the Mayor of Jerusalem has accused the Israeli Ministry of Health of neglecting Palestinian hospitals in the city. His strange idea of acknowledging them was by sending Israeli military jet flights to fly over Saint Joseph Hospital in Sheikh Jarrah to salute them on the eve of Israeli Independence Day in a “historical and exciting event that symbolized the unity against the virus.” Maybe the exciting and historical event was that the jet planes dropped no bombs.

Perhaps the relative segregation and under-testing of the Palestinians in OEJ was good for statistics. The latest update on May 6 from the Palestinian Ministry of Health showed only 174 patients in OEJ out of the 3592 in the city (Orthodox Jewish neighborhoods are heavily affected). In addition, the relatively younger age of the population might explain having only two deaths. Evidently, this pandemic has emphasized the vulnerability of the Palestinians in Occupied East Jerusalem in the face of Israeli neglect, violence and blockage of the little available services of the PA or UNRWA. Meanwhile, the OEJ inhabitants themselves remain a community that survives without being rescued.

2 Pierre Bourdieu. The left hand and the right hand of the state. From conversation published in 1992. http://www.variant.org.uk/32texts/bourdieu32.html

4 Berlin, Anita. 2019. NEJM interview on the relationship between the state and medical care and maintaining the integrity of the medical code of ethics. https://www.nejm.org/do/10.1056/NEJMdo005558/full/

11 The Washington Post. April 11, 2020. Israelis and Arabs accuse each other of exploiting coronavirus for political gain in Jerusalem. https://www.washingtonpost.com/world/middle_east/israelis-and-arabs-accuse-each-other-of-exploiting-coronavirus-for-political-gain-in-jerusalem/2020/04/11/e9d81346-78d4-11ea-a311-adb1344719a9_story.html

14 The association for civil rights in Israel. May 2012. Neglect and Suppression in East Jerusalem: The Policies behind Widespread Poverty and Unemployment. https://law.acri.org.il/en/wp-content/uploads/2013/03/EastJlem-Poverty-ENG-web.pdf

Osama Tanous is a specialized pediatrician based in Haifa. He is currently pursuing a Master’s in Public Health and is a researcher for the Galilee Society: The Arab National Society for Health, Research and Services. Osama is a 2020 candidate for the Fulbright Hubert Humphrey Fellowship in public health and health policies. His research interests include structural violence and health disparities.

On the Postponed Palestinian Elections: The Role of the Left